Real Madrid is known for the quality of its players, the magical moments that the great white legends have brought to their audiences. The list of names is endless and filled with true artisans of the craft. Di Stefano and his 5 European trophies, Zinedine Zidane and the legendary volley that gave the 9th European title to the Merengues, Butrageño’s breath taking dribbles in the box, Hugo Sanchez and the 38 first touch goals in a single season. Real Madrid has cultivated a long tradition of exquisite players that gave the Club its fame with feats of skill, endurance and will. Yet among the galaxy of stars that fills the club’s history, there is one star that has left an impression so great in the hearts of the Madridistas that it is still remembered in every match, the one player that left an impression so profound that every 7th minute the Santiago Bernabeu stadium still roars with his name, Juan Gómez González “Juanito”.

Juanito was a peculiar man, full of life and always living in emotional extremes. His teammates remember him as an intense and impulsive character capable of arguing with them to the point of fighting and coming up the next moment with an apology and a hug from the heart. The man lived and played with the passion of young love, and it was this passion and fighting spirit that tied him forever to Real Madrid, but his beginnings as a football player started on the opposite side of the street.

Juanito was signed at 14 years of age by Real Madrid’s city rivals Atletico de Madrid, and made his debut with the first team in 1973, at just 17 years of age. The legend says that Juanito forged his papers to be able to play with the U18 squad in a friendly game vs SL Benfica where he scored two goals; however, an unfortunate incident changed his future as a football star. In an accidental play with Henrique, Benfica’s goal keeper, Juanito fractured his tibia and fibula, an injury that would make him miss the rest of the season in a long recovery process that kept him away from the pitch for almost a year.

After a long recovery, Juanito was fit and ready to play again but Atletico’s Coach Juan Carlos Lorenzo decided that there was no space left for him in the team. In August of 1973, Juanito was loaned to second division side Burgos CF. After a rocky first season Juanito turned into the sole star and led the humble team into the first Spanish division. In his first season in the top league, Juanito earned the best player award, attracting the attention of the most important clubs in Spain. 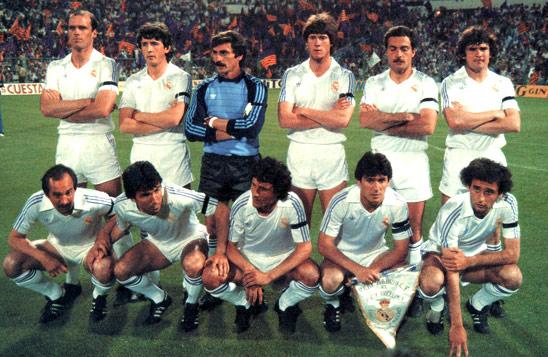 In his time at the club, he played alongside other Madrid legends like Santillana, Uli Stielike, Vicente Del Bosque and José Antonio Camacho. Juanito played as a right winger; fast, agile and elegant, with the ball abilities that turned him into one of the best players of his time. He was also a fan favorite not only for his displays of skill but for his determination and love for the club.  But it was this same intense and impulsive character that made him unpredictable and often a reckless person.

Juanito was such a strong character that he could split the Madridistas into his supporters and the defectors, yet no one dared to deny his greatness. In 1978 he was suspended for 2 years of European competition by UEFA for attacking referee Adolf Prokov, Juanito later apologized and stated profusely that his intention were never to hurt or assault him.

In his stay at Real Madrid, Juanito won 2 UEFA cups, 4 Spanish League titles, 2 domestic cups (copa del Rey) and a second place in the Champions league.  But perhaps what Juanito and the rest of his team will forever remember is the spirit of the “Magical European nights”, the spirit of conquest that took over the team and the whole stadium to help them comeback from seemingly certain defeats. During Juanito’s tenure at Real Madrid, the team managed to come back from losing the first leg in the final rounds an astonishing total of 15 times. Whenever it was time for a comeback he was one of those who would scream most, pressure the referees, disturb the rivals, and encourage his teammates.

It was this fighting spirit that helped them comeback from a 5-1 loss vs Borussia Monchengladbach with a 4-0 win at the Santiago Bernabeu, and in the next round of the same tournament they managed to fight back from a 3-1 loss vs Inter Milan. It was in this match where Juanito said his Immortal Line: “Noventa minuti en el Bernabéu son molto longo” (90 minutes are the Bernabéu is a very long time).

Sadly, the intense character that ignited the team’s spirit and the public, also brought the end of his career at Real Madrid. In 1987, during a Bayern Munich vs Real Madrid match, Lothar Matthäus, Bayern’s midfielder, committed a brutal foul on Chendo. Juanito reacted in what he later claimed to be the worst mistake in his career, he stomped Matthäus while the German was on the ground. Juanito was expelled and faced a 5 year ban from European competition. Real Madrid decided that Juanito’s career at the club had come to an end.

Juan Gomez Gonzalez was a charismatic leader, a strong willed man filled with life and love; he was capable of igniting the audience in every match and evoked the most intense feelings of Madridismo. But as any romantic hero, as any iconic man, he lived fast and died young.

April 2 1992, Juan Gomez “Juanito” was on his way back to the city of Merida after attending a Real Madrid vs. Torino champions league match. It was 2 o’clock in the morning on the 161,625 kilometer of the N-5 highway in the town of Toledo. Juanito was being accompanied by Merida’s fitness trainer, the latter didn’t notice the logs that had been dropped by a truck so he ran into them. Juanito was the only victim. Today, 20 years later, Real Madrid fans still remember the legendary number 7,  and they manifest their respects by screaming his name every 7th minute of every game, in the stadium that saw him shine and become one of the most recognized Los Blancos legend. ILLA ILLA ILLA, JUANITO MARAVILLA!!!!