Home
EURO 2012
Backs to the Wall for the Azzurri Again – Spain vs. Italy Preview

Following their 3-0 friendly loss to Russia, all the ingredients are now in place for Italy to stage another fairy tale similar to their 2006 World Cup triumph: a match-fixing scandal back home, their credibility crumbling after three consecutive losses, and questions existing about how the Azzurri hold up against top class opposition, let alone on how they will stage a meaningful challenge for the European finals.

Precedents in history point to one thing: the Italians enjoy making their doubters eat their words, finding inner strength within themselves to prompt team solidarity of epic proportions to progress all the way. This time however, with the squad looking relatively leaderless, as if in a state of shock despite breezing through their qualifying campaign, one wonders if they find it in themselves to call on their natural ability to react against the odds.

Italy’s loss to Russia could prove a blessing in disguise if lessons from the defeat are taken in the right way.

Admittedly, coach Cesare Prandelli has worked a miraculous transformation of the shambles that collapsed out of the World Cup in 2010. While two years of good work, including playing on par against Euro 2012 favourites Spain and Germany in their friendlies, do not necessarily get thrown out of the window after three poor performances, Italy has to try it’s hardest to arrest the state of regression it currently is going through while it is not yet as bad as her critics make it out to be.

Italy will have their first chance to make things right against reigning Euro and World Cup champions Spain. It will prove a daunting task for Italy to see their opponents off, in light of their defensive mess-up against the Russians the previous week, but not an impossible one. The key will be to finding the answers from within.

Juventus defensive stalwart and Italy injury casualty Andrea Barzagli could have supplied the answer to Prandelli’s defensive debacle when he shared the credit with the rest of the Bianconeri team for helping the club’s defence concede only 20 goals in a successful Serie A campaign. Similarly for Italy, credit for a good defensive collaboration must be shared, as must the blame for a poor one be distributed. 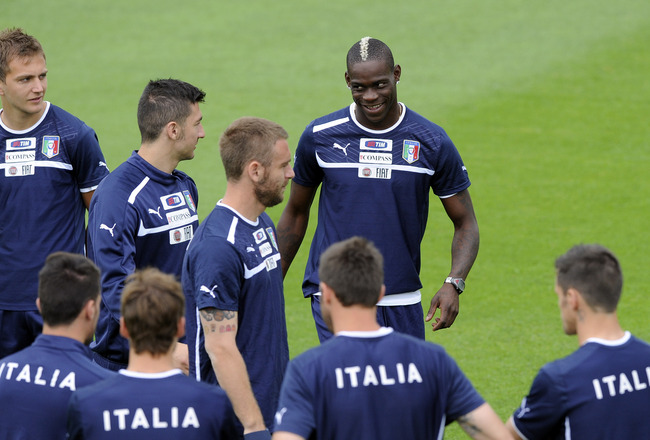 The burden of defending must be shared amongst the whole team if Italy are to arrest their slide.

On the whole, the level of team play against Russia looked disjointed at best, with the gaps between midfield and defence causing confusion as the players struggled to find their positions. None proved more evident than Christian Maggio’s performance, who’s mistakes led directly to two of Russia’s goals. Moving to a 3-5-2 formation, which many Italy players are already familiar with given they were tactics also utilised by their clubs, will only worsen the situation.

Prandelli has used a 4-3-1-2 right through qualifying, and suddenly performing a hurriedly-pieced together stopgap switch risks worsening the confusion amongst players. Retaining the 4-3-1-2 but spending time working on increasing the compactness of the lines will pay more dividends for Prandelli’s men than using it to try something new altogether. Italy, who only played one friendly prior to this Sunday, no longer have the luxury of time to experiment.

Daniele De Rossi is too valuable a midfielder to be wasted in a central defensive berth, and will be crucial alongside either Claudio Marchisio or Antonio Nocerino in stemming the flooding forwards of Spanish midfielders to swamp a defence in bad need of a confidence boost. Nevertheless, while playing a deep line of defence has its benefits, answers further forward will need to be answered first.

Daniele De Rossi’s versatility must not distract Prandelli from his obvious quality as a midfielder.

Part of the surprising unfamiliarities amongst teammates are also in part due to Ricardo Montolivo’s unsuitability to the Trequartista role, which he has been utilised in as of late. While Sebastian Giovinco could provide a longer term solution to that position, one immediate dividend of using the 4-3-1-2 will be the ability of midfield enforcer Thiago Motta to take up that role against the Spaniards.

It would certainly be a somewhat radical position to field the hardman in, but if Italy are to retain their shape on the field against a Spain-side built on keeping possession and ensure chief playmaker Andrea Pirlo is not isolated, Motta’s pressing high up the pitch will be crucial. The Paris Saint-Germain midfielder is no brute either, packing the intelligence to find a killer through-ball or thump shots from outside the box on target.

That is as much as Prandelli can do to ensure a result, and in the words of Motta himself, the other elements that lie beyond tactics will depend on the desire of the team to play for it’s pride. Italy traditionally have been slow starters, and a win over the Spaniards will be crucial to boosting enthusiasm levels in what has been a testing few weeks for the beleaguered side. Achieve that and progress from the group stages, and we may just see another Berlin 2006, as a new generation of Azzurrini prepare to write their own history.