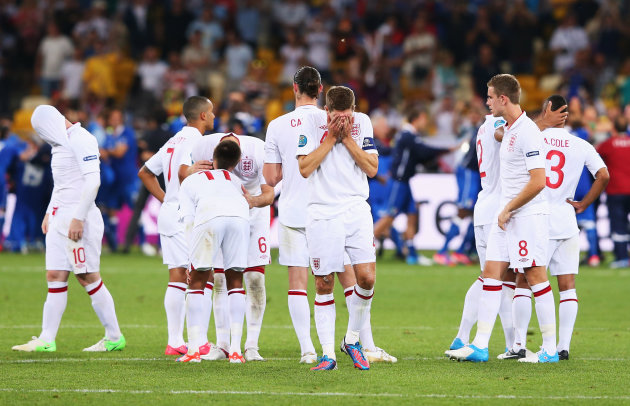 England’s quarter-final jinx continued as the three lions crashed out of this year’s European championships on penalties.  Italy progressed into the semi-finals of the competition on the back of an inspiring display by their senior most players, Pirlo and Buffon.

Italy almost found themselves leading three minutes into the game when De Rossi’s beastly volley swerved and hit the post. However, England started the game in lively fashion with lots of possession and some wonderful linkup play. The English were rewarded for the early possession with a couple of fantastic opportunities but failed to convert any of them.

Glen Johnson’s run was picked up perfectly in the box by a brilliantly drilled ball from James Milner. However, the English fullback’s effort was saved by the Italian goalkeeper from close range. England came close few minutes later as Wayne Rooney headed over a pinpoint cross from Johnson, who did magnificently to pick out the Manchester United striker.

Battling hard to gain any sort of control of the game, the Italians finally managed to get a hold of the midfield after the first quarter of an hour. From there on it seemed to be a one sided affair. The likes of Pirlo, Montolivo and De Rossi were in cruise control as the Italians created chance after chance with their superb movements and incisive passing.

Andrea Pirlo, who seems to be getting younger by the day, dominated the midfield with his excellent vision and sublime passes. The Juventus midfielder had an exceptional game as he racked up a staggering 155 touches of the ball and completed 87% of his attempted passes.

Pirlo found the Manchester City striker, Mario Balotelli with a couple of fantastic long balls who did brilliantly to beat the offside trap. However, a couple of extra touches allowed defenders Terry and Lescott to get back and rob the Italian striker of his possession. De Rossi came close to scoring when Claudio Marchisio headed the ball back into the box after the English defenders cleared it from a corner.

England failed to get back into the game and resorted to long passes as the likes of Parker and Gerrard failed to dominate the midfield. Brilliant pressing by the Italians forced the English midfielders into misplaced passes. Statistics showed that the most number of passes exchanged in the England side was between Hart and Carroll, who had 15 passes among them.

England manager Roy Hodgson tried to influence the game with a double substitution as he brought on Theo Walcott and Andy Carroll. The Liverpool forward did well to win all of his aerial duels but was left isolated for major parts of the game, therefore, failed to make any significant impact. However, Carroll almost assisted the winner right in the injury time of normal time when his knockback was acrobatically sent over the crossbar by Wayne Rooney.

The Italians produced chance after chance as the Azzurris enjoyed a lion’s share of possession. However, English defenders had an inspiring game at the back and managed to resist the barrage of Italian attacks. Plenty of missed chances from the Italians and some brilliant defending by the English meant that the game was dragged into extra time. The story was similar in extra time as both teams were tired. Italy continued to look for spaces but failed to find the back of the net as the English threw everybody back more often than not.

The English looked destined to head for the penalties, maybe the time for redemption had come. The English team will have thought about the 2006 world cup and their miserable showing in the penalty shootout.

England looked like they would change things this time around as Rooney and Gerrard scored to give England the advantage after Montolivo blasted his spot kick wide. Balotelli and Nocerino took their chances to keep Italy in the game.

However, the English side, famous for their act of deception threw it away as Ashley young hit the crossbar with a fierce shot and Ashley Cole followed up with a weak left footed attempt straight into Buffon’s arms.

Andrea Pirlo’s lovely chip at the back of the net and Diamanti’s composed left footed spot kick ensured that the Italian journey in the Euro 2012 continued as the Azzurris made it to the semi-finals where they will face the mighty German side in their quest for the holy grail.