You may have noticed that FIFA two weeks ago delayed the publication of its ranking list. This wasn’t due to any technical problems, but because the ranking of two African teams was dependent on the results of a decision taken by FIFA’s disciplinary committee.

The ranking list was of great importance as the draw for the third and final round of World Cup Qualifying in Africa (CAF), with the ten group winners from the second round being drawn into five two-legged ties, with the five winners advancing to the world cup. The ten teams are split into two pots of five, with one team from each pot being drawn against each other. Which pot a team is put into is determined by their FIFA ranking.

The announcement came that FIFA had upheld a complaint by Tunisia that Cape Verde Islands had fielded an ineligible player in a qualifying match against Tunisia the previous weekend.

This meant that the result was overturned from a 2-0 Cape Verde win to a 3-0 Tunisia win, which not only meant that Tunisia were in the draw at Cape Verde’s expense, but because that result also bumped up Tunisia’s ranking, placing them in Pot 1 of the draw at the expense of Egypt who would be drop into Pot 2 (Egypt would draw Ghana in their World Cup play-off as a result of this).

Cape Verde’s exploits were the feel-good story of the World Cup qualifiers. Cape Verde Islands are an archipelago about 350 miles off the coast of West Africa, which became independent from Portugal in the 70’s, and have a population of about 500,000. They could potentially have been the smallest country ever to qualify for a World Cup (which may end up being Iceland, who are still in with a chance of qualification).

Qualifying for the World Cup would have capped a great few years for the Cape Verde team, also known as the Blue Sharks. For years since joining FIFA in 1982, Cape Verde had made little to no impression on International football. They didn’t enter the World Cup until qualifying for 2002 and had to watch several talented players, such as Nani and Manuel Fernandes opt to play for Portugal instead.

That changed a few years ago when Cape Verde began selecting professional players from Portugal, Angola and other nations, of Cape Verdean descent to make up, along with players from the local league, the national team. Under the leadership of manager Lucio Antunes, who’s also an air-traffic controller, the team started to improve and broke into the top 100 in the FIFA rankings.

A year ago, Cape Verde defeated Cameroon over two legs to qualify for the 2013 African Nation’s Cup; their first ever tournament appearance. In the tournament, Cape Verde acquitted themselves well, reaching the quarter-finals before being beaten by Ghana.

During the World Cup qualification, Cape Verde had already been eliminated, when it was ruled that Equatorial Guinea had played an ineligible player against them, which tuned a 4-3 defeat into a 3-0 win. This meant that Cape Verde’s game against Tunisia would determine which of the two teams qualified for the World Cup.  Cape Verde won the game 2-0. 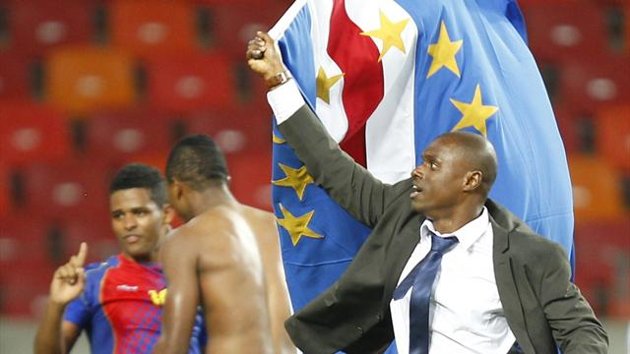 However, the drama was far from over as Tunisia lodged a complaint that Cape Verde’s defender Fernando Varela should not have played as he was suspended. Varela was sent off in the 4-3 defeat to Equatorial Guinea that was overturned, and Cape Verde believed that when the result was overturned, it negated Varela’s red card and subsequent suspension.

FIFA disagreed, citing Article 18 of its disciplinary code, which states:

“An expulsion automatically incurs suspension from the subsequent match, even if imposed in a match that is later abandoned, annulled and/or forfeited”

Lena Vasconcelos, the deputy president of Cape Verde’s Football Association (FCF) said after hearing of the decision “It is a nightmare… Lots of people have phoned up to tell us we are right, that when a match is forfeited all the red and yellow cards are taken away.”

Cape Verde does have the right to appeal, but it’s hard to see on what grounds. The rules seem pretty clear and it’s equally clear that they breached them. Ignorance of the rules isn’t an excuse.

The real question is, why didn’t they know the rules?

The problem, as ever in African football, is down to the incompetent and, in some cases, corrupt administration that prevails through the continent. In many countries, there is a total lack of transparency and accountability about their actions. Many of these administrators have some clout within the halls of power at FIFA, which means that FIFA are reluctant to step in and do anything to improve things.

There’s barely a qualifying tournament that happens in Africa without an administrative blunder, and when teams do qualify for tournaments, there’s often hugely disruptive disputes about, logistics, pay and bonuses, which should have been sorted out long before.

A report by the Forum of African Investigative Reporters (FAIR) called Killing Soccer in Africa, which was started after a Cameroonian journalist was beaten up after he looked into the finances of the Cameroon Football Association (whose president is CAF president Issa Hayatou) concluded that:

FIFA’s stance on government interference into football does not help either. Many African football associations heavily rely on government support for the infrastructure and finance required to compete, so it is virtually impossible to separate football from state, which FIFA requires. Bad administration can often lead to government inquiries, which can lead to the government wanting to step in and take action; but that can lead to FIFA sanctions, so in many African countries a vicious circle of bad administration and bad performance is maintained.

Pele famously predicted an African nation would win the World Cup by 2000. No African team has progressed beyond the quarter-finals.

Pele once famously predicted that an African nation would win the World Cup before 2000. When he said that, African football was developing rapidly. Since then, there really hasn’t been much progress. With a couple of exceptions, African teams haven’t made much of an impression in recent World Cups, and the dream of an African nation winning a World Cup seems further away than ever.

British journalist Jonathan Wilson says about the situation in Africa “Until African nations have financial resources that are competitive with Europe, they’re doomed to be susceptible to corruption, they’re doomed to have a lack of infrastructure, and they’re doomed to constantly be scrabbling around because the bureaucrats in positions of authority won’t organise things properly”

African nations certainly have passionate fans and people who love football. Several African countries have the talent to compete with the world’s best. However, too many African countries are let down by the terrible administrative mistakes that have made a mockery of African football over the past few years, and until that is rectified, it’s hard to see African teams competing with the very best in the world.

A Look Ahead At The UEFA World Cup Qualifiers

Tue Mar 30 , 2021
Starting Friday, 53 European nations will begin their journey to become one of 13 from UEFA to qualify for the 2014 World Cup in Brazil. The anticipation and expectations are high, and the headlines about the nine intriguing groups are everywhere as the big day has finally arrived. After extensively […]