Kosovo is a region that seceded from Serbia after years of warfare and ethnic tensions between Serb and Albanian communities, and declared its independence in 2008. It is currently officially recognised by 23 of the 28 member nations of the European Union and 108 UN nations in total worldwide.

To become a member state of the UN, the state applying needs the support of at least 9 of the 15 members of the UN Security Council, which must include support from all five permanent members (USA, UK, China, Russia and France). At present amongst the current UN Security council members; Argentina, Chile and Rwanda do not recognise Kosovo as an independent state. Unfortunately for Kosovo, neither do Russia or China, so Kosovo stand little chance of becoming UN members for the foreseeable future.

This really hurts them when it comes to playing international football. In 2002, as part of their efforts to keep Spain sweet by barring Gibraltar from joining (despite a their own executive committee recommending their admission); UEFA passed a resolution stating that all UEFA members need to be members of the UN, with grandfather clauses allowing non-UN nations England, Scotland, Wales, Northern Ireland and the Faroe Islands to keep their UEFA member status.

In the case of Gibraltar, a court ruled that as they had applied for membership before UEFA passed that resolution, it didn’t apply to them and UEFA had to let them in, which they eventually did, following multiple court orders, in 2013. 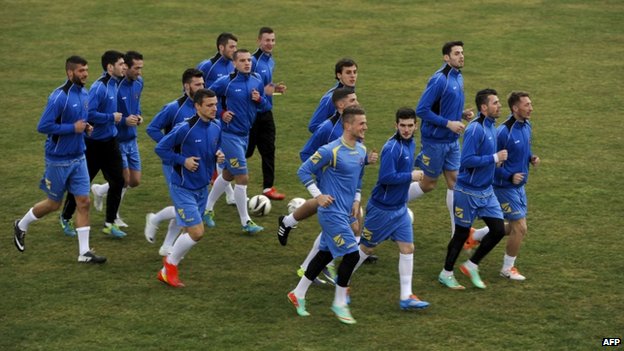 So in international football terms, Kosovo have been on the outside looking in. Sadly, UEFA president Michel Platini seemed unmoved by Kosovo’s plight and was unwilling to do anything to help. In 2012, Sepp Blatter, in a rare display of acting for the good of football, and much to the chagrin of Platini, forced a decision through the ExCo, which meant that Kosovo could play international games against FIFA teams.

It took some time for the details to be worked out, but FIFA announced in January that Kosovo could play friendlies, albeit with restrictions that include no displays of emblems or flags, no national anthems and Kosovo can’t play against any of its fellow Balkan nations. After some consideration, Haiti were chosen as Kosovo’s first opponents.

There was some controversy over Kosovo’s choice of venue. Rather than the capital, Pristina, the game will be played in Mitrovica, a town with a sizeable Serb population. The ruling body for football in Kosovo, the Football Federation of Kosovo, said that this was the only suitable stadium in the country.

Then there was the question of who Kosovo would pick to play. The violence and poverty which has blighted life in Kosovo for years has resulted in a substantial Diaspora of Kosovar people all over Europe. Several footballers of Kosovar heritage have emerged as players for other countries. Players such as Xherdan Shaqiri, Granit Xhaka and Valon Behrami of Switzerland, Sweden’s Emir Bajrami, Lorik Cana of Albania and Shefki Kuqi of Finland are all experienced internationals, who would qualify to play for Kosovo.

Sepp Blatter has said that if Kosovo were ever to join FIFA, no player could switch nationality if they had played for another international side (except Serbia), but as this is just a representative team, there was theoretically no reason Kosovo couldn’t select any eligible player who wished to play.

On Sunday, the Kosovo squad was announced. As expected, none of the players currently involved in the Swiss setup were selected, but Albert Bunjaku, who played for Switzerland in the 2010 World Cup, was included.

Hashim Tachi, Prime Minister of the Republic of Kosovo, meets the Kosovan squad before the match against Haiti.

Other members of the squad include Palermo goalkeeper Samir Ujkani, an Albanian international, as well as fellow internationals Ardian Gashi (Norway) and Lum Rexhepi (Finland), as well as under-21 internationals Loret Sadhiku (Sweden) and Flamur Kastrati (Norway). Emir Bajrami missed out because of injury.

Kosovo had also hoped to call up Manchester United’s Adnan Januzaj, who was born and raised in Belgium, but qualifies for Kosovo through his parents. However, Januzaj has opted to give this game a miss and is still undecided on which country he wants to represent, with Belgium and Albania both vying for his services, and he could also qualify through residency for England in a few years.

Wednesday’s match was played in front of a packed stadium, which could have been filled several times over, such was the demand for tickets. While it looks as though Kosovo’s football team won’t be able to join UEFA or FIFA any time soon, at least they are able to finally play and Kosovar footballers can dream of representing their own country in the future.

Tue Mar 30 , 2021
It’s not often I can write something in praise of FIFA and UEFA. However, last week, they may have helped to broker a deal to end a bitter dispute between two nations (in terms of playing football, anyway) and to bring in one of the largest European nations currently outside […]