This is an article on some of the lesser known faces of recent Brazil squads (all of them defenders or midfielders) that stand a good chance of making the final selection for the 2014 World Cup. I have tried to avoid the more obvious players such as Neymar, Lucas Moura, Oscar etc here or even the established Brazilian players that have been in Europe for quite a while (the likes of Lazio’s Hernanes and Shakhtar’s Willian being examples): 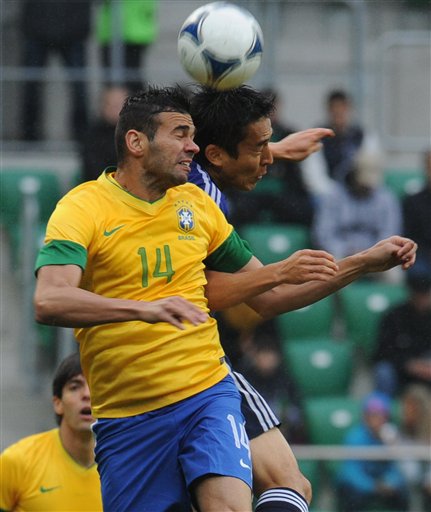 After impressing in Corinthians double of the Copa Libertadores and their Campeonato, Castan was purchased by Roma in the summer of 2012 for 5 million euros.  He is a powerfully built left-footed centre-back but in his caps for the Selecao so far he has been deployed as a left-back – a position he can defensively hold down but when it comes to the attacking phase of play he looks awkward at best.  Brazil coach Mano Menezes has a liking for the player though and he has a strong chance of starting at the World Cup.

Dede was voted as the best domestic defender by the Brazilian public in 2011.  He was a tower in Vasco’s late surge towards the Brazilian Serie A only to be beaten in final matchday by Corinthians.  Atheltic, comfortable in possession, strong in the tackle – he possesses all the necessary tools to go all the way.  His performances have earned him call-ups to the national squad and in 2012 he has 4 caps in 2012 so far.  Dede was expected to make the move to Europe last summer but in June he signed an extension to his current contract which also added on a 20 million euro buy-out clause.  This scared off potential suitors such as Manchester City. The player also seemed quite reluctant to move as he was afraid of losing first team football in the build-up to the World Cup. Whether or not this is a choice that again factors his decision-making this season is yet to be seen.

Comparisons to Edgar Davids fit this midfielder fit very well.  He stands at only 5ft 7 but he is extremely mobile, his pace allowing almost allowing him to be in two places at once.  Arouca is also a very tidy and precise little player and has been a pivotal figure at Santos for nearly three years now.  Some even attribute the strengths of Arouca as a big part of the hype surrounding his former midfield partner Ganso.  He only has two caps at the moment but Arouca is a player whose reputation is steadily increasing by the week.

In the way that Arouca is compared to Edgar Davids, Ralf shares many similarities in style with Felipe Melo.  Ralf is a bit more mobile than his compatriot but both share that same warrior spirit.  He excels in physical battles and is one of those players who rises to the challenge.  Strong links to Fiorentina surrounded him in the summer but he decided to sign an extension with Corinthians.  He works beautifully with the midfield Paulinho mentioned below.

Paulinho is the ying to Ralf’s yang at the engine room of the Copa Libertadores winning Corinthians side.  Both are very athletic, physical players who do not shy away when the tackles come flying in.  Paulinho is more box-to-box than Ralf. He breaks late into the area and as a result possesses a good scoring record for a midfielder that gets through so much defensive work.  Paulinho is also very strong in the air and is a real threat at set-pieces, scoring more than a few crucial goals for Corinthians in such situations.  It should be noted that the tactical discipline of Ralf and Paulinho was the cornerstone of such a successful Corinthians side and that although both may not start at the World Cup, it would not be surprising to see both eventually become consistent figures in the Brazil team post-2014.

Romulo was another player to make his name in Vasco’s 2011 Campeaonato run and since then he has not looked back.  After impressive displays with the Selecao at the Olympics, Romulo moved from Vasco to Spartak Moscow for a fee of 8 million euros, some reports saying it could rise as high as 12m.  After a blazing start to his career in Russia, scoring against Rubin Kazan and the second goal in the 3-2 away defeat to Barcelona in the Champions League, Romulo’s season was cut short after tearing his anterior cruciate ligament and partially rupturing his posterior and lateral ligaments in a league game against FC Rostov.  The young man’s burgeoning career has been put on hold for the time-being but it will be intriguing to see if he can regain fitness and playing time for the Confederations Cup.

The final two players mentioned in this article are wildcards I have selected.  Toloi is a centre-back who has recently found himself playing at right-back since his move to Sao Paulo and has been thriving in it.  He is one of the main players of the current Sao Paulo side along with fellow defender Rhodolfo, midfielder Casemiro and attackers Lucas Moura and Luis Fabiano.  His team have recently reached the semi-finals of the Copa Sudamericana and Toloi scored an absolute screamer of a long-range free kick against Universidad de Chile that was clocked going in at 129 km/h.

The second Roma player to feature on this list and one that turned up in Serie A a complete unknown.  Despite having one of the leakiest defences in Italy, the youngest has been one of the few shining lights defensively for the Giallorossi.  At only 18 he has become a regular over the past two months and I for one cannot find another centre-back the same age who looks more complete than young Marquinhos.  He has captained the Brazilian U-17 team and has recently made a leap to the U-23 squad.  The 2014 World Cup may come too soon for him but he is a player destined for the highest level.