The Odds Are Crazily Stacked Against Milan. They Just Have To Be Crazier.
Skip to content

The scale of Milan’s task having to face Barcelona in the Quarter-Finals of the Champions League was evident from the day they were drawn together with arguably the strongest club side ever assembled in the history of football. Several weeks later, Milan now have to grapple with declining odds against a new and potentially deadlier opponent: the injury crisis that has struck Milanello, threatening to derail everything good they have achieved this season. 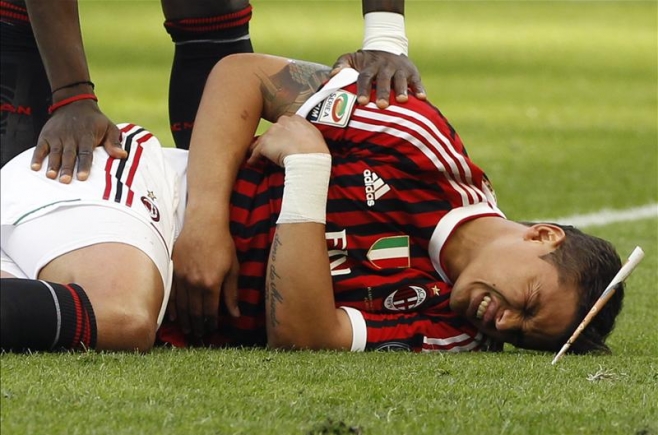 The tactical choices available to Milan tactician Massimiliano Allegri, particularly in defence and midfield, are not looking particularly rosy. The Scudetto front-runners defeated A.S. Roma 2-1 in the weekend Serie A action to keep distance off second-placed Juventus, but that result could be made to feel like a defeat tonight should the fact they lost world-class defender Thiago Silva to injury return to haunt them against Barcelona.

Such circumstances tip the odds further in Barcelona’s favour, causing Allegri to scratch his head in befuddlement as he questions what he did to deserve the task of having to take his beleaguered side past opponents who’s performances tend to transcend those of mere mortals. Truth be told, it will be pretty crazy to harbour hopes in Milan’s elimination of Barcelona and the advancement to the Semi-Finals. Below are five ways in which Milan can be ‘crazier’ to secure some hope of making it through the first leg:

Tactics at the minuscule level are not going to work if the team’s philosophy is not firmly established. Milan have the necessary quality to win the Champions League, but even if the team were at full strength, they couldn’t afford to slog it out head-to-head with Barcelona. With the situation at hand now, Milan have to sit back and allow their opponents to come at them, looking to frustrate them and hit them on the break.

Such tactics have been employed this season by the smaller regional sides that make up La Liga to great effect, forcing Barcelona off the pace in the title race and ensuring they depend ever more on Messi to produce a typical moment of magic to win them games. Milan have the necessary quality to punish a frustrated Barcelona in this case, and if they can hold out till the 70th minute and conserve their energies before starting to push forward, they stand a chance of snatching a result.

Don’t use Ibrahimovic as the out-and-out striker

Zlatan Ibrahimovic may be Milan’s top and most reliable scorer with 22 goals in Serie A so far, but there’s so much more to the Swedish superstar than merely being expected to do what his position entails of him. Employing him as an isolated out-and-out striker against Barcelona will just work against Milan, and he has to be utilized in a deeper role that will enable him to use his flair for conjuring up the unthinkable to create space for his teammates to get forward with intent.

Such a role paid its dividends when Milan tore Arsenal apart 4-0 at the San Siro, with Ibrahimovic laying on 2 goals as well as orchestrating countless other attacking moves to get his teammates into good attacking positions. With Barcelona expected to control the majority of possession here, Ibrahimovic stands to become that much more involved in matters should he is to be used in a slightly more unfamiliar role than normal.

Play the Trequartista in a defensive role

The Prince has the energy to attack and defend simultaneously.

Milan are going to have to accept that they will be on the back foot for much of the game. Their primary formation, the 4-3-1-2, works in their advantage in this case, given its midfield can be adapted to play with a more attacking or defensive-minded mentality, the latter looking the more obvious choice here.

Whether Dutchman Urby Emanualson or Kevin-Prince Boateng adopts the role of the attacking midfielder, or Trequartista, behind the strikers, their role will lie more in disrupting Barcelona’s fluid building of their attacks from deep. How well either energetic player goes about the job harassing and disrupting the movements and composure of Barcelona’s principle architects Xavi, Fabregas or Iniesta could hold the difference between a defeat or a result for Milan.

These oldies can teach their younger opponents a thing or two still.

Much has been made of Serie A’s ageing players. Admittedly, they do not have the physical attributes necessary to get them through an entire season in the domestic league, thus limiting the effectiveness of their contributions, but in a competition that calls on as much of international experience and exposure as a player’s natural talent and ability, Milan very much have the advantage over Barcelona.

From Clarence Seedorf to Massimo Ambrosini, Alessandro Nesta (if he is fit) and Gianluca Zambrotta, Milan’s veterans should be given priority to start the game, where they must rise to the fore to lead by example. The onus lies on them to expect to know when to make the right foul, the right move, the right burst and the right feint in order to provide an embattled Milan with the leadership and impetus necessary to secure something from this game.

Do what matters – get the goals

A few goals are within Milan’s reach.

For all Barcelona have contributed to the game via their tiki-taka style of play, characterized by breathtaking displays of attacking football that are a far-cry from the dour, cynical side commonly associated with Calcio, or Italian football, the reality in football is, the performances of the team still lies secondary to its results.

Given their injury crisis, Milan have had to dig deep in order to secure their wins in Serie A. Their football may not be the prettiest at times compared to that of Juventus’ or Roma’s, but it must be admitted, it is efficient. It will be very ‘Italian’ for Milan to grab a few goals against the run of play and and hope for the best in the away leg, where they will face another daunting 90 minutes trying to do exactly the same, but that’s football for you, and exactly what they have to try for.

So there you have it, the ways in which Milan can chase the dream of progressing over both legs into the semi-finals. It takes guts to stare Barcelona in the eye and say you deserved a win more than them, so the biggest tip to Serie A’s representatives here is, don’t try. Regardless of whether tonight’s game proves to be an example of pragmatism vs. fluid perfection, or a thriller where both sides throw caution to the wind, you’re going to be guaranteed what could go down in history as a classic of European football, as A.C. Milan entertain F.C. Barcelona at the San Siro.

Tue Mar 30 , 2021
Unfortunate Inter Milan tactician Claudio Ranieri has constantly fallen under the curse of working under club owners who expect miraculously optimistic, even hopeful, results that exceed the means of the team he has been handed the reins to. Beleaguered Inter Milan Manager Claudio Ranieri. His struggles with Inter Milan are […]