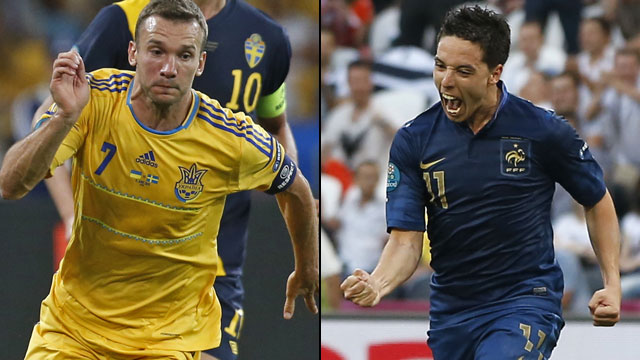 Group D leaders, Ukraine will be looking to get something out of the game when they come face to face with France in their second game of the group stages. Having started the tournament in brilliant fashion, the co-hosts will want to progress beyond the group stages of the competition.

Ukraine pulled off a major surprise in their first group game against Sweden when veteran striker Andriy Shevchenko cancelled out Ibrahimovic’s opener with his first goal in this year’s tournament and then won the game with his second to complete a stunning brace in a space of few minutes.

Once the darling of Europe, Shevchenko will be the man Ukraine will look forward to with the hopes of their qualification hanging on whether the former Milan striker can replicate his Sweden brilliance against the likes of France and England.

France on the other hand has started the tournament really well. Although the Les Blues came away with a solitary point against England, Blanc’s men were the superior side for major spells and will probably feel that a victory would have been the most appropriate result.

Les Blues will be firm favourites against an inferior Ukraine side and will look to secure their passage into the Quarterfinals with a convincing victory.

Blokhin’s men made it evident in their previous game that they may not have the best of squads but they do have a solid team. With a lot of pace and trickery, coupled with some serious finishing pedigree, and with the experienced Tymoschuk pulling the strings from the midfield Ukraine will be a very dangerous team on the break.

The likes of Kono and Yarmolenko will trouble the French full backs with their pace. Konoplyanka in particular had a top class game against Sweden and looked menacing when he took on the Sweden defenders and whipped the balls into the box for the likes of Shevchenko to deal with.

France will be full of confidence when they take on Ukraine after a superb performance against the English. Although they will be disappointed not having won the game, they will be far more relaxed against Ukraine, given the fact that the English have one of the most compact defences in the tournament.

Under Laurent Blanc, French have played exciting football with the midfield interchanging positions frequently. Star players Nasri and Ribery had inspiring performances against the mighty English defence and are likely to cause serious damage to the Ukrainians.

Nasri in particular has been in spectacular form as he made life difficult for the English defence with his intelligent one-two’s and sharp movement. Trailing the game by a goal to nil, Nasri brought his side back into the game with a magnificent long range effort to beat his club mate Joe Hart and was rightly awarded the man of the match.

Striker Karim Benzema, who has had a fabulous season with Real Madrid, will be looking to make his impact after having a mediocre game against the English. Clumsy movements and lack of diligent runs into the box made it easy for England to deal with the young French prodigy.

However, questions will be raised regarding the defensive frailties of the French. The French defence seemingly went to sleep at times against England. Improper marking during set-pieces allowed Lescott to score an easy goal after Milner missed the best chance of the game having sent clean through on goal after a defensive lapse.

Despite all the huff and puff from the co-hosts, the Les Blues will come away with a comfortable victory that will boost their hopes of securing a place in the Quarterfinals of the European championships.