Previously, I wrote an article ‘The trouble with Arsenal’, which analyses whether or not Arsenal have become a selling club; the conclusion being an emphatic yes. Since their invincible season, the club have made a staggering £40 million net profit from transfers and have developed a habit of signing young talent, nurturing these players and then selling them on to slightly bigger clubs.

I’d like to expand on this further, because a week ago on Saturday, Arsenal lost 2-0 at home to Swansea which caused for some fans to call for Arsene Wenger’s departure. In my personal opinion, I think it’s ludicrous to want to sack Wenger and Arsenal fans would be making a big mistake if they began to push any ‘Wenger out’ campaigns forward.

If there’s any blame to be placed, or reasons for Arsenal’s poor start to the season, it’s the boards’. Simply because they haven’t been prepared to invest in the squad anywhere near as much as some of the top teams have and since they’ve sold van Persie, they’ve gone a few steps backwards in terms of goalscoring quality in the short-term.

Is that Wenger’s fault? Robin van Persie clearly wanted to leave, it would have been wrong to keep an unhappy player. Neither Giroud nor Podolski have yet filled van Persie’s boots, but you have to give them time! When Thierry Henry came to Arsenal, he didn’t score in any of his first 8 games. When RVP arrived, it took him four seasons to start scoring consistently. I think Wenger has handled the van Persie situation perfectly, because he’s got rid of him for £24 million, and immediately signed his replacement. There’s not a lot Arsene could have done, but obviously the loss of van Persie will have affected the team. It’d affect any team, and has inevitably played a big part in Arsenal’s slippery start.

It’s understandable that the fans aren’t happy with the club sitting in 10th place – if they finish there at the end of the season then of course they’ll be massively underachieving, yet I think they would be overachieving equally if they won the title, which is what some fans say is their objective.

What I’d like to ask in this article, is why should that be the aim? Why should Arsenal necessarily be winning the title? Maybe it’s because I’m a Birmingham City fan that I’ve learnt to appreciate success more, but they clearly haven’t got the resources that teams like Chelsea and City have – as we’re about to find out – so shouldn’t Gunners fans be simply grateful to be playing in the Champions League every season? I know I’d be.

I’d like to make my point by examining the amount of money Arsenal have invested in their squad since that fantastic 03/04 invincible season, in comparison with Man United, and City and Chelsea since they’ve had their takeovers:

We can see here, Arsenal are actually making a profit from transfer activity, whilst City and Chelsea are spending billions and billions at will on proven world-class superstars. With such little money, Wenger has done an amazing job to keep Arsenal anywhere near the billionaires. Bear in mind they’re in the top four so consistently. In fact every single season since 1996.

Now, a lot of pundits are saying ‘spend, spend, spend’, but I think it shows a certain prudence, rather than ignorance, from the Arsenal board and Wenger to not pump stupid money into the club, that they might not necessarily have.

Take Leeds United for example. Ridsdale took out a massive bank loan to pay for players like Robbie Fowler and Seth Johnson, all on massive transfer fees and wages but with the prospect of Champions League TV money to repay the bank. Eventually, they lost out to Newcastle for 4th place and so didn’t get money they expected and had to sell everyone and eventually the club dropped two divisions.

Or Portsmouth even. They won the FA Cup, and I think that indirectly killed them, because all of a sudden they could attract these higher-profile names like Crouch and Kaboul on high wages, but they weren’t getting enough income to pay for it.

The building of the Emirates

The biggest, and possibly sole factor in Arsenal’s ‘buy cheap, sell big’ transfer policy, has been the construction of the Emirates stadium, which cost the best part of £400 million. It has a capacity of just over 60,000 and at Highbury, there were 20,000 season ticket holders. It did seem like a gamble that was very reliant on expanding Arsenal’s network of supporters, getting people from afar to come to individual matches.

This gamble seems to have paid off to some extent. Once the stadium was built, there were 40,000 season tickets on request and now the new home has increased Arsenal’s annual turnover to £170 million. There are positive signs for the future.

Emirates Stadium will pay for itself in the long run.

On the other hand, such a grand long-term plan for the club has not been without its impacts on Arsenal in the short-term. I feel like it’s been a job of ‘damage limitation’ for Wenger in a way. Before the Emirates project had started, Arsenal were always either there or thereabouts when it came to the title race and had few restrictions when it came to the transfer market.

Then, when the Emirates stadium was being built, Arsenal began to sell their best players and replace them with younger players and develop them before selling them on and so on. With a £400 million project in progress, they simply couldn’t afford to continue assembling a title-challenging team. Chelsea then, with Abramovich’s ruble and Mourinho’s panache, took over as the team competing with United at the top midway through the first decade of the millennium.

What impresses me then, is how Wenger managed to keep Arsenal hanging on in there. They’ve never been out of the top four, which would be a reasonable achievement for a club with any kind of money, but to be doing this whilst having to always sell your best players and whilst being in a constant state of transition, is remarkable in my eyes.

A prolonged state of transition

Continuously selling their best players must have had some kind of effect on the morale of the team. If I was a player, I’d be furious that the club is always selling players, it will have had an impact on everyone’s belief that they can compete at the top and win things with Arsenal. 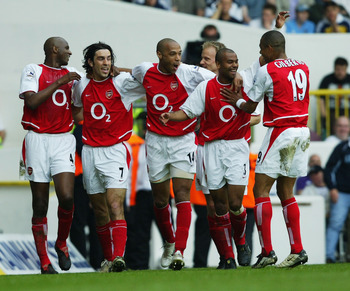 Players of this quality were not replaced adequately.

Whenever they’ve sold one of their key players, they’ve signed a young replacement around the time of the sale. In some cases – with Alex Song replacing Vieira and Van Persie replacing Henry for examples – it’s taken the new players the best part of 5 seasons to become anywhere near the standard of their predecessor.

Many people would define this as a transition phase, but Arsenal appear to be constantly in a transition phase in almost every position. Not many teams would have coped with this slightly unsettling transfer policy and without someone like Wenger who can spot cheap replacements brilliantly, I reckon they would have dropped to midtable.

That’s what you’ve got to give Arsene so much credit for. Only a manager with the hawk-like eye for potential talent that Wenger has, could take Arsenal through what has been a constant period of transition, and keep them in the top four, every single season.

We criticise Arsenal for not being able to make that final push into the title race by buying world-class stars, but the fact that they’ve never been out of the top four proves that Wengers methods have been, for the most part, a success.

If you look through ‘The trouble with Arsenal’, you’ll see that only the cases with Maroune Chamakh replacing Adebayor and Andre Santos replacing Clichy have seen Arsenal sell one of their best players, and not find a replacement that has proved to be a success in the long-term.

When you look at how little Arsenal have spent compared with other clubs, to be keeping them in the Champions League is a fantastic achievement, and underlines his ability to cut costs by signing young players and developing them. It takes a potential talent-spotting ability that is second-to-none to be able to do that.

They won’t be midtable for long

Before I conclude, I’d like to make a quick point about where they are in the table. Being 10th looks awful on paper, but they won’t be 10th for much longer. There are about 5 teams above them who are all on 22/23 points, and before January arrives, the Gunners have got to play West Brom, Reading, Wigan, West Ham and Newcastle, three of which are home games.

Having rested the whole team in their final Champions League group game against Olympiakos, I think Arsenal will beat West Brom on Saturday and it wouldn’t surprise me if they got at least 12 points from those games. I’m sure they’ll be back in the hunt for 4th soon.

People moan about him not having won a trophy for 8 years but surely playing the Champions League every season is more important? Arsenal fans, ask yourselves this: Liverpool won the Carling Cup last season, would you honestly rather be where they are now, having won a cup that’s become an opportunity to field a reserve team?

I can understand the fans’ desire to win something and celebrate something, but it’s overrated. Getting the TV money from playing in the Champions League is the best way to take Arsenal through this transition phase, once they’ve broken even from the cost of the building of the Emirates. There is not anywhere near as much financial reward from winning one of the domestic cups as there is from playing in the group stage in the Champions League.

Considering they are currently 10th, this may seem like a very bold statement to make, but I firmly believe that with Wenger at the helm, the only way is up for Arsenal. Given the considerable expectations Gunners fans bring with them, Wenger has led Arsenal through the transition period, during the construction of the Emirates when funds weren’t bottomless, very well. The club is now near the stage of breaking even, and now with a laudable long-term sponsorship deal, I personally think the club remains to have an exciting future.

Why Manchester United won’t run away with the Premiership title

Tue Mar 30 , 2021
If you had to offer me a prediction now, as to who will win the title this season, I would be more than inclined to say Manchester United. They’ve got a seven point lead, they’ve beaten City on their own turf and are notoriously good at doing the business in […]