The Under 20 World Cup gets underway in Turkey on Friday.  Here are the best players worth keeping an eye out for: 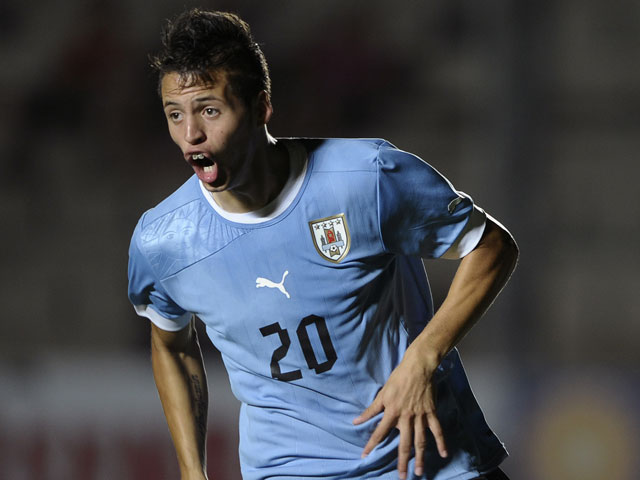 The Roma starlet burst on to the scene in Serie A, earning the Giallorossi a last minute 2-2 draw at home to Catania on the opening match of last season with a stunning goal (shown below).  Nico struggled for playing time throughout the rest of the campaign but that didn’t stop him terrorizing defences in the Copa Sudamericano with Uruguay U20s, finishing the tournament as top goalscorer amongst some sterling names.  He is a nimble, tricky customer with a left foot that will punish you if given a yard.

The man who set the Copa Libertadores alight in 2012 playing for Jorge Sampaoli’s Universidad de Chile.  A frightening talent who since joining Manchester United and being on loan at Wigan, you can see him physically evolving to prepare himself for the riggers of the Premier League.  He stands out as the brightest light in a very exciting Chile side in this tournament, a team I expect to be the most entertaining.

Compared to Wayne Rooney after breaking through at Everton, the similarities are plain to see.  He shares that same swagger and volatility to his game, something that constantly has him dancing off the edge of genius and madness.  But Barkley is without a doubt the most exciting player in this England U20 squad.

Gomes is a very tactically aware player, a strength which allows him to play numerous roles in the midfield.  His greatest qualities lie in his techinical abilities, long and short range passing as well as a ferocious shot from distance with either foot make him a constant threat.  He has already impressed greatly with Portugal at the under 19 level, scoring in two of the three matches Portgual played in the 2012 UEFA European Under 19 Championship.  And in his breakout season for Benfica in 2012/13, he earned a call up to the senior squad against Ecaudor, despite being only a peripheral figure in the squad due to the performances of Nemanja Matic and Enzo Perez.

One of the sensations of the Serie A season, Quintero was a mainstay in an attack minded Pescara side.  In the previously mentioned Copa Sudamericano tournament in January of this year, it was Quintero who was awarded the Player of the Tournament.  With a left-foot that takes me back to the great Austrian wizard of the 90s Andreas Herzog, Quintero is a danger from anywhere on the pitch.  Set-pieces included.  He also loves to nutmeg opponents and plays as though he has eyes in the back of his head.  Quintero is worth the admittance fee alone.

After joining Fenerbahce last summer, one the great hopes of Turkish football had to make do with late substitution appearances and cup games.  But don’t doubt the 2012/13 season was huge for him, despite the lack of playing time he was still exposed to life in a  huge club, the Europea League and the expectation of winning.  Salih Ucan is a player who likes to up the tempo when required, very capable in swift passing moves, already thinking of his next pass before he’s making the current.  His creativity and ability to protect possession will be vital to Turkey’s progress out  of a potential banana skin of a group and the expectation being the home team brings.

With ex-Lille manager Rudi Garcia’s move to Roma in the past week being confirmed, seeing this left-back linked to Roma for €12million was expected.  Thrilling coming forward, another in a long line of talented French left-backs.  Lovely whip and weight on his crosses, excellent reading of the timing of the cross and he does not shy away from the defensive aspect of his game, pbeing particularly aggresive in the tackle.  His long-throws would also give Tony Pulis a wet dream, especially given the height of this French squad.  Destined for big things.

Thauvin experienced his breakout year in Ligue 1 this season, scoring 10 goals for Bastia and earning him a winter move to Lille (although he returned to Bastia on loan until the end of the season).  Although left-footed, he will play most likely as the right midfielder in the French team.  Deceptively skillful, particularly at dragging the ball just when the opposing defender looks like he is about to win possession, Thauvin comes into this tournament playing a very strong French midfield alongside the likes of Paul Paogbia and Kondogbia.  A lot of the creative burden of this side will fall on his ability to carve out opportunities and shown by his scoring record form midfield, Thauvin never shies from having a pop himself.

Recently linked to Barcelona and Chelsea, although the link does come somewhat pre-mature for the centre-back.  Comfortable in possession and bringing the ball out of defence to transition to attack, Lichnovsky also brings some much needed height to the Chilean back-line.  With what looks like it will be a very open and entertaining Chile, it will be intriguing to see how he copes.

Five Stars of the Euro U21s

Tue Mar 30 , 2021
Spain continued their dominance of almost every youth level by easily defeating Italy 4-2 in the Euro U21s Final on Tuesday night in Israel.  Here are a rundown of the five standout performers of the tournament: 5) Adam Maher Nestling in front of Kevin Strootman and Marco van Ginkel in […]