Home
News
Serie A
Napoli missed out on the Champions League final, but what does that matter?

No one really cares about where the Coppa Italia goes so long as the Scudetto is up for grabs. That has been the sad reality of recent edition as Italy’s domestic cup competition plays second-fiddle to its league counterpart, as is common place in so many other European football landscapes. Not this season, however.

The two finalists, Juventus and Napoli, have intriguing back stories that will set this finale apart from every other. While the Bianconeri, who claimed their first Serie A title after six year on Sunday, will be looking to pay departing club captain Alessandro Del Piero a fitting tribute by lifting their tenth Coppa Italia, the onus lies with Napoli to make something out of their most realistic chance so far to lift silverware in decades.

Napoli, since their promotion once more to Serie A, have gone on to establish themselves as a force to be reckoned with. While they played a part in last season’s Scudetto race as well as gave the Champions League’s much-vaunted EPL sides a run for their money this term, this final represents their best shot at glory and a return to the big time. For the southern outfit, winning the Coppa Italia will be taken as a symbolic achievement, a small stepping-stone on the way to greater success as the first trophy to be won in the new eras being painstakingly forged.

A physically beleaguered Napoli that invested so much effort in Europe was unceremoniously dumped out of the elite club competition by a team sporting nearly three times the monetary resources at their disposal. Sunday’s final arrives as a gift just when the Partanopei need to rediscover and maintain their belief that they have been doing great things since they returned to Serie A. Seizing this chance at cup success will spark renewed impetus and create new belief in the players’ and club’s means, in order to begin next season with the best foot forward. 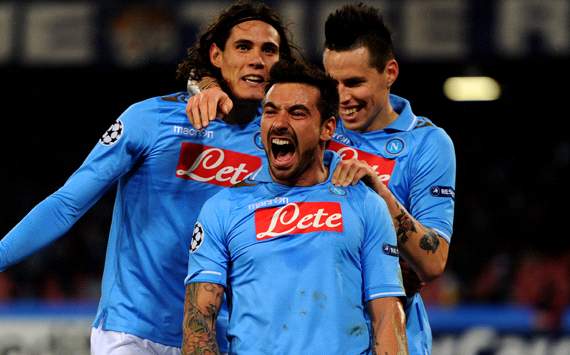 Napoli's players have a chance to give their club's name renewed pride this Sunday.

The reason is simple: The Coppa Italia may remain a smaller piece of silverware in the eyes of the ordinary public as a domestic cup, when in contrast, winning it will represent much greater value to the hungry players and fans of the once-great club, who are at the forefront of a revival of one of Calcio’s historic sides.

For all the talk of Lionel Messi being the next Diego Maradona, the same moniker could be placed upon Napoli patron Aurelio De Laurentiis, who has made the same impact on the club as the Argentine superstar, albeit not from the field. Despite punching above their weight, Napoli may struggle to retain the services of coveted attacking triumvirate Edinson Cavani, Marek Hamsik and Ezequiel Lavezzi in the face of interest from clubs who consistently challenge for Europe’s greatest club trophy. That explains the feeling of ‘now or never’ amongst the club’s loyal fans, who already missed seeing their team qualify for next season’s Champions League.

Napoli will do well to shake their notorious inferiority complex playing against the more established sides of Calcio if they are to have any chance against the new league champions however. That said, Juventus are by no means unbeatable, and if the Partanopei can exploit their opponent’s Achilles heel of being profligate in front of goal, then the game will be a wide-open affair.

Recent encounters between both sides have never failed to entertain.

If encounters between Juventus and Napoli are anything to go by, this Coppa Italia final will be a cracker of a game. The last three meetings between these two sides yielded 11 goals, with a particularly spectacular 3-3 draw fought out in Naples last year.

This season’s Coppa Italia is a road to redemption. Starting small, success for Napoli will serve as a springboard to spur the club to keep faith in its reconstruction project and look forward unto a horizon that promises much. Over in Spain, it is not by chance last season’s Copa del Rey winners Real Madrid have broken the dominance that arguably is the greatest ever club team in the history of the game, F.C. Barcelona. To the rest of Serie A, beware. Underestimate the Coppa Italia to you peril.