Juventus, a club accustomed to winning, yet starved of that unique flavour in recent times, roared back to everyone’s attention in the European realm as they clinched their 30th (detractors would contest that number) Scudetto, or Italian league title, on Sunday evening. 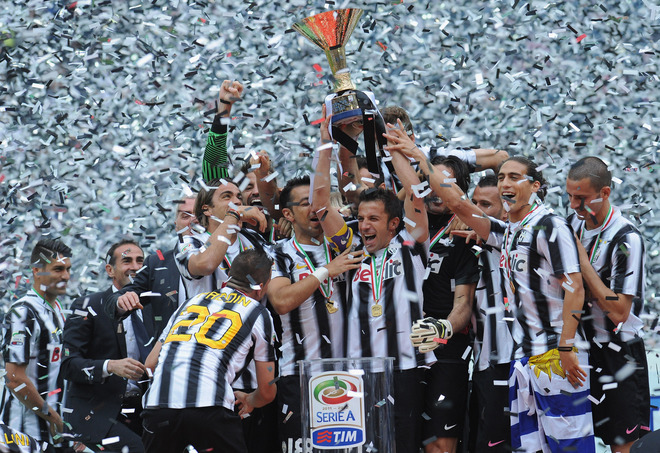 Juventus win the Scudetto to the jubilation of their fans.

While to the delight of their millions of fans worldwide who sensed the prize, the club’s first in six years, was at its closest to being paraded around in Turin after so long, one could not help but wonder, how did it all change for a side stuck in mid-table to reach the pinnacle of an Italian triumph in the space of a single season?

Many opinions populate football talk shows and expert opinions across the Italian peninsula, and indeed, this writer was swamped with answers when he ran a Facebook poll asking a mixed group of Serie A fans what they thought proved to be the turning point in this season’s title race. While feedback ranged from Sulley Muntari’s phantom goal against Juventus to Claudio Marchisio’s winners against former league champions A.C. Milan in October 2011, this writer’s opinion stands as such: the balance of power shifted in favour of the Bianconeri with the admission of their relevant weaknesses when compared against the Milan juggernaut.

A self-admission of weakness was not what the average Juve fan wanted to hear at the beginning of this season; after all, the club had finished the previous two in seventh position, its credibility in shambles after fans grew weary of the team’s apparent lack of progress in spite of the myriad of changes effected to both coaching and playing departments. 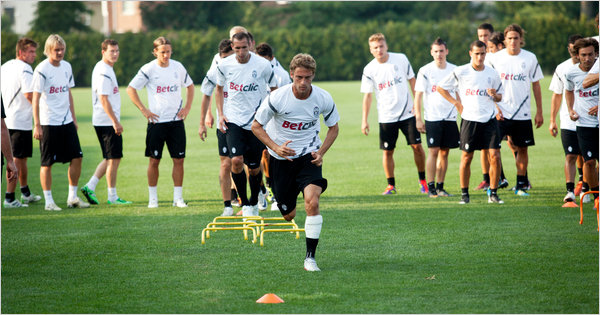 Hard work was to become the mantra of Antonio Conte's new Juventus side.

Nevertheless, there was an air of honesty in the way the words were spoken by new coach, former captain and club legend Antonio Conte. Those words were never meant to belittle the club or the players, but to enforce change for the better; the team would have to grow and improve tenfold in order to prove it’s worth to the fans and the club’s name.

Such an attitude imparted a desire to work, to make up for their deficiencies and the way they were viewed by their fans, that inspired the team to over-produce what would normally be expected of them. So different from other coaches, Conte imparted a crucial sense of modesty that ensured the expectations placed on the team were aptly managed; they were not likely to win anything, but there was no harm in trying and seeing what they ended up with anyway.

To try, and try they did. Empowered by having nothing to lose and with an acknowledgement of their shortcomings, while their opponents sat basking in the glory of their triumph the previous season, Juventus rallied while the Rossoneri fell into decay, their vision clouded by their apparent strength in allowing Milan icon Andrea Pirlo to depart for a new challenge with the dark horses. What a decision that turned out to be, as crucially were the failures to find suitable alternatives to ageing players such as Clarence Seedorf, Massimo Ambrosini, Mark van Bommel and Alessandro Nesta.

Milan, inadequately equipped from a squad level, were made to suffer as the season progressed.

Naturally, while a mindset of humility helped, heart and spirit were not going to win Juve the title alone; reinforced by an intelligent transfer campaign that also netted Arturo Vidal, Stephan Lichtsteiner, Mirko Vucinic and Martin Caceres alongside metronome Pirlo, these inductees soon became acquainted with the essence of wearing the club’s shirt at the inspired opening ceremony of the new Juventus Stadium, the first structure to be owned exclusively by an Italian club independent of the town’s council.

The rest is now history; aided by Milan’s persistent injury crisis as well as a fair bit of good old luck, Juventus worked their tails off to capitalize on the former champion’s odd slip-up in gifting their fans a renewed sense of pride in calling the team theirs.

The Bianconeri would not have achieved their highs this season without first having to go through the lows of the past six years. While the new Italian champions can boast of having a character of iron forged in the furnaces of fire surrounding Calciopoli, the face of adversity was obviously newer to Milan, who were not prepared for the sudden materialization of competition that dared to challenge their might.

Driven on by a small group of players who represented the heart of Juventus and aided by new members who did not want to leave without first writing history afresh, the rest is history as the team now basks in the adulation of their fans. With Champions League football beckoning, the players will do well not to have forgotten where they have come from, as the Scudetto looks to beckon in the start of a new winning cycle for the club.