All of these achievements in the span of only ten years. Surely this is the track record of a world class manager? Strangely enough, many would disagree. The track record is that of someone who in the past couple of years has become criminally underrated: Rafael Benitez.

After the demise of his Liverpool career and his doomed stint at Inter, the achievements of the Spaniard seem to be almost forgotten by many.

Rafa took over the managerial role at Valencia in 2001 after a successful spell gaining promotion into the Spanish Primera with Club Deportivo Tenerife. Valencia had suffered two back-to-back heartbreaking defeats in the Champions League final in the two previous seasons and a considerable number of that team’s big stars (Mendieta, Deschamps, Milla and Zahovic) had recently been sold by the time Benitez arrived. In his debut season in top flight football, Benitez won the Spanish Primera. Valencia’s watertight defence, led and characterised by the unfaltering Roberto Ayala, was the main reason behind their success, conceding only 27 goals in the league. In terms of attacking play, it’s noticeable that no member of the Valencia team that season featured in the top six of the Pichichi trophy race which goes to show the collective strength of this Valencia team.

Rafael Benitez would outdo his debut season at Valencia a year later by winning the double in the 2003-04 season. Frontrunners Real Madrid collapsed in the final stages of the season and Valencia ruthlessly beat them to the league title. They also achieved European success by winning the UEFA Cup. A tight defence again was the biggest reason for Los Che’s achievements that season under Benitez. They conceded only 27 goals in the league and 5 goals in 13 European games en route to the their UEFA Cup triumph. Outstanding seasons from wingers Rufete and Vicente coupled with the clinical strike rate of striker Mista proved to be a winning combination for Valencia as Mista finished the season third in the Pichichi race while Vicente came to be regarded as the most in-form player in Spain that season. Indeed, despite only being 22 years old at the time he quickly became a permanent fixture in the Spanish national side. Rafa still remains the last manager to win La Liga with a club other than Real Madrid or Barcelona.

Benitez was hot property thanks to his success over the past three seasons at the Mestalla. Disagreements with the Valencia chairman and a feeling of unappreciation at the club led to him leaving the Mestalla and taking the reins at Anfield.  Liverpool were a club desperately trying to revive the glorious heights of their past and Benitez, at some points during his time there, propelled them back into the big time. In his first season at Liverpool he managed to win the Champions League, the most prestigious club tournament in the world, with a squad that was largely still the making of previous managers – out of all the players who played in that final, only Xabi Alonso and Luis Garcia had been Benitez signings. That night In Istanbul went down as one of the most unforgettable matches in football history. It is no understatement to say that Benitez greatly overachieved with the squad he had at his desposal at this time with the likes of Djimi Traore, Steve Finnan, John Arne Riise, Jerzy Dudek and Vladimir Smicer playing against a Milan side busrting with superstars. 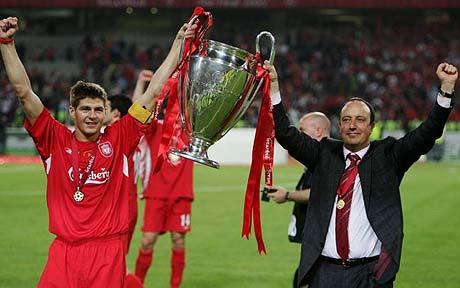 In the 2005-2006 season, another trophy came Liverpool’s way in the form of the FA Cup and by the start of the next season, Benitez had greatly strengthened his side through the acquisitions of Daniel Agger, Pepe Reina, Fabio Aurelio and Dirk Kuyt. Again, Rafa achieved the unexpected when he took Liverpool to another Champions League final. However, AC Milan had learned the lessons of their previous meeting and Liverpool lost 2-1. The Reds again strengthened in the summer adding the likes of Fernando Torres, Javier Mascherano, Lucas Leiva amd Alvaro Arbeloa to their ranks. Torres in particular became a fan favorite with 23 league goals in his debut season. In the 2008-09 season, Benitez finished with Liverpool’s highest ever English Premier League point tally (86 points) and chased Manchester United all the way to the final matchday to decide the league title. United proved to be the winners in the end although Liverpool did record a memorable 1-4 away victory at Old Trafford against their rivals. The following season proved to be a bitterly disappointing one for Liverpool, with the sale of Xabi Alonso and Alvaro Arbeloa to Real Madrid and with key players Torres and Gerrard both missing large chunks of the season through injury. Also, Alberto Aquilani, the player brought in to fill the void left by Alonso’s departure, was a completely different type of player and, as a result, the team could not re-adjust to his strengths. Aquilani had also spent most of the year on the treatment table at Roma before joining Liverpool and Benitez was accused of being too cautious in introducing the player into action. Liverpool finished 7th at the end of that season and Benitez was dimssed from his role in June 2010. The Spaniard’s conflictual relationship with Liverpool owners Gillette and Hicks, along with his failure to finish the season in the Champions Leagues spots and the team’s dismal run in the league that year all led to his departure from Anfield.

Although Benitez failed to win a league title during his spell with Liverpool, his record there is excellent. Benitez left England with an impressive win percentage during his first 200 games in charge which will be illustrated in the table below. Also, it is interesting to compare Rafael Benitez’ points per match average at Liverpool to Harry Redknapp’s at Tottenham Hotspur. Redknapp achieved 1.73 points per match on average while Benitez gained 1.87 points.

Benitez then moved to Italy and took on the role of manager at Inter Milan, a side that had achieved a historic treble under Jose Mourinho the previous season. Benitez’ spell at Inter was short-lived but he still managed to win two trophies whilst there before being sacked in late December 2010. Mourinho himself claimed that he had pushed the Inter squad to its limits and that any manager would’ve had an impossible task motivating a side that had achieved so much. Inter have had three managers since Benitez and all (with the exception of Leonardo) have fared just as poorly.

One thing that goes by unnoticed about Benitez is the performances he gets out of players. There are more than a handful of top quality players who can be said to have played by far the best football of their career under the Spaniard. The most notable examples are Steven Gerrard, Fernando Tores, Pepe Reina, Daniel Agger, Vicente Rodriguez, Roberto Ayala, Ruben Baraja, Carlos Marchena, Francisco Rufete, Mista, Pablo Aimar and Luis Garcia. No other mananger has been able to get such strong performances out of them. Indeed, Benitez leaving their club led to many of these players experiencing a loss of form. Gerrard, Torres and Vicente in particular have come nowhere near replicating the same form they showed under Benitez. Despite the (arguably fair) criticism he received for some of his purchases in the transfer market during his time at Liverpool, he did bring in and nurture a number of players who became key players at Anfield – Daniel Agger, Lucas Leiva, Dirk Kuty, Xabi Alonso, Fernando Torres, Alvaro Arbeloa, Javier Mascherano and Fabio Aurelio.

Just two of the players who have failed to get back to the level they were playing at under Benitez.

Since his departure from Inter, Rafa has been linked to numerous positions at big clubs (Chelsea being the most recent) but he remains unemployed. The feats he achieved at Valencia and Liverpool now play second fiddle in most minds to his poorer spells in his last season at Anfield and at Inter Milan. It’ll be intriguing to see Rafa’s next choice as he tries to rebuild his reputation. One thing is for sure though, the club that takes on Rafael Benitez will have employed a manager who has a history of over-achieving and whose track record shows a man who knows his football, despite what many may say.

Real Madrid on Fire this Season

Tue Mar 30 , 2021
When José Mourinho was appointed manager of Real Madrid in June 2010, he stated that his teams are always better in his second season. It appears he was right, because his Real Madrid is currently the runaway leader of La Liga, and on course to break 3 major historical records. […]