If you had to offer me a prediction now, as to who will win the title this season, I would be more than inclined to say Manchester United. They’ve got a seven point lead, they’ve beaten City on their own turf and are notoriously good at doing the business in the back-end of the season.

Having said that, I don’t think they’ll win the title with total ease. Man City will still have a big gain in terms of not playing matches in Europe in midweek, they’ve got a more solid defence and the spending power to invest in January. Here are some reasons why United may struggle to finish the job in the second half of the season.

Let’s examine where the defensive record of the past Premiership title winners has ranked amongst that of the other teams in the league:

Having said that, they have missed the likes of Jones, Smalling and Vidic and particularly Vidic will make a big difference so I would expect their defensive record to improve, but you’d still expect them to be doing better than having conceded similar numbers of goals as West Brom and Sunderland.

Van Persie’s goals have been pivotal- what if he gets injured?

Leading on from the point about their defensive record, they’ve been let off the hook from this several times by having a fantastic ability to come from behind and score goals. Can they continue to rely on

People make the point about United having great attacking options, which I wouldn’t completely disagree with. Although Welbeck is being slightly overrated in my opinion, Hernandez is a fantastic impact substitute and any team would be very happy to have those players. 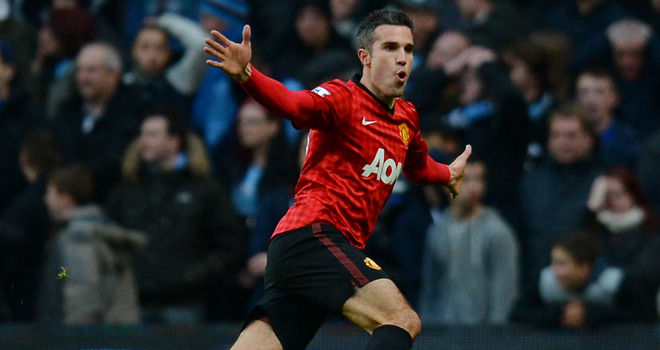 RVP has been the difference maker for United this season but are they too reliant on him?

Despite this, I do feel there is a big reliance on Robin van Persie this season, as his 16 Premiership goals have won United 16 points. Of course there’s an argument that if van Persie wasn’t playing, another striker would and they’d get some of those goals back, but I don’t reckon they’d have got as many with Chicharito. Plus, the Mexican adds nothing in terms of experience in build-up play and his sole focus is on scoring goals in the box, whereas van Persie provides the team with some more creativity, having already got 6 assists.

However, my concern for United would be that van Persie won’t be at his best if he’s playing constantly in the Champions League on Wednesdays and in the Premiership on weekends. There’ll need to be an element of prioritizing and team rotation from Ferguson to stop RVP suffering from jadedness.

Also, you have to question what would happen if he picked up a long-term injury. Here, I’m not saying: “van Persie will get injured, therefore United won’t score goals, therefore they’ll lose games, therefore they’ll lose the title.” The point I’m making is that you can’t predict what will happen in the second half of the season. An injury could easily happen to Tevez or Aguero for City, but because you don’t know when or where injuries will occur, it seems premature to say that Man United will run away with the title.

United have the harder run-in

Of the two clubs’ fixtures towards the end of the season, United have definitely got it harder. They go away to Stoke who are yet to be beaten at home, then they play rivals Arsenal and Chelsea, and West Brom who have also got a great home record at the moment. Four games there, in which there’s a fair chance United could drop points.

City have to go Tottenham which will be a hard game, but all of their other matches, apart from maybe Swansea away where they slipped up last season, ought to be quite straightforward.

Let’s not also forget that United might be in the quarter-finals or semi-finals of the Champions League around this period, whereas Man City’s team will be spending the whole week focusing on the game ahead, which I think will be a big advantage.

People who predict Manchester United to win this years’ title at a canter, with a 7 point lead as early on in the season as December have obviously forgotten the 8 point lead they blew away last season in April. On the other hand, if United can get themselves in that position again, I don’t believe they’ll throw it away, because some of the younger players in the squad will have learnt from that experience and they won’t want it to happen to them twice.

On balance, the next few weeks will be important in the title race. If City can damage limitate and reduce the gap to 4 or 5pts, they’ll have a good chance in the back end of the season once the Champions League starts and United have other competitions to worry about. However, if United can maintain the gap or even extend it, then I think they’ll have enough strength in depth to finish the job and win the title back.

Lewis Holtby – Too Slow and Too Small

Tue Mar 30 , 2021
With the January transfer window well under way one of the best deals of the window so far may not come to fruition until the summer. FC Schalke’s prized asset Lewis Holtby has agreed a £67,000 a week deal with Tottenham Hotspur and will move to the North London side […]